At the first glance, inequality and racism, or more generally intolerance, seem to be two radically different phenomena. One seems to be mainly a socio-economic phenomenon, while the other seems to be personal, or at most, cultural. However, there are various theories that propose a strong, reinforcing interrelationship between the two. This post introduces one of those theories.

In this post, I discuss a model proposed by Alan Day Haight, which shows how an increase in intolerance leads to more inequality. It also demonstrates how the rise of force or hate speech in the society, can worsen the inequality-intolerance in a society.

In his 2013 article, The Intolerance Multiplier: a Diagram, Haight proposes a graph that demonstrates the dynamics of inequality-intolerance interplay (Figure 1). In the graph, a resistance curve divides the areas where the level of inequality is tolerable and where inequality leads to protests. There is also an intolerance curve which demarcates the limits of discrimination and intolerance in a society. 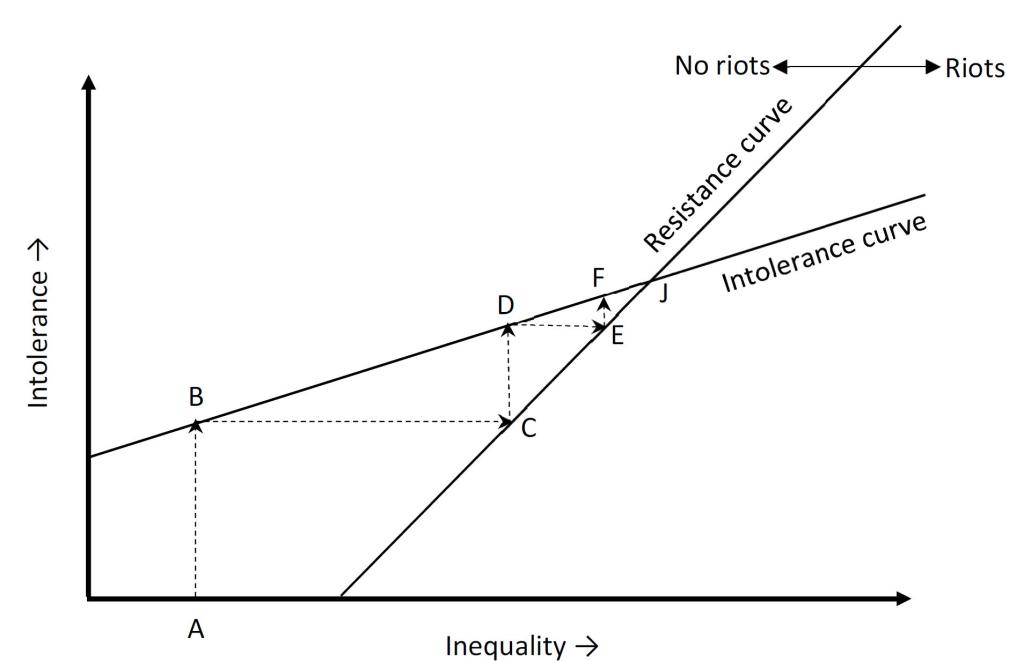 The model works like this. Assume the current state of the society is at point A, to the left the resistance curve and below the intolerance curve. At this point, both inequality and discrimination are within tolerable. However, eventually, the presence of inequality leads to some intolerance, i.e. those with less access to material benefits begin to blame the ‘others’. Ethnic minorities, women, migrants, etc. become the scapegoats. So, intolerance rises. But, it cannot rise beyond the intolerance curve, and thus, the society reaches point B.

At point B, the divide in the subaltern class is to the point that the upper class can easily increase inequality without the fear of strong resistance from the public. However, inequality cannot rise past the resistance curve, where the sharp contrast between the quality of living makes the working classes forget the differences and actively oppose inequality. Thus, with intolerance at the level of B, inequality can only rise to point C.

This dynamic can go on and on again, from C to D, E, F, G and finally J. Point J signifies the equilibrium within the current institutional and structural conditions. It denotes the maximum level of inequality and intolerance that can exist in the current system without a serious reaction from the working classes.

However, the social, political, and economic conditions of a society are not static but change through time, and consequently, the curves may shift. For example, the increase of force or ideologies justifying inequality can shift the resistance curve to the right (Figure 2). In this way, the society can tolerate more inequality before it burst into riots.

The shift of the intolerance curve or the resistance curve relocates the equilibrium point. For example, in Figure 2, the increase of force moves the equilibrium to point X and the presence of a demagogue moves it to point Y. Note that in both conditions, the new point of equilibrium signifies a state with a higher level of inequality and tolerance than the previous equilibrium.

Haight’s model offers a good understanding of the dynamics between inequality and racism. It well demonstrates how totalitarian societies are more prone to racism. Or vice versa, it can be used to explain how societies with low levels of tolerance, can become a fertile ground for the rise of inequality.